The Greek capital city already exists for 3500 years. Athens enjoyed its golden age was during the classical period, in the 5th century B.C. At that time, a great number of buildings like the Acropolis were built. During the Byzantine Empire and Turkish domination, Athens played a less important role. As the capital city of contemporary Greece, Athens became more significant from 1834 onwards. The National archaeological museum, the Acropolis and the wonderful Acropolis museum, not to mention the Agora and the Benaki museum are worth a visit. Enjoy also the cosy areas of Plaka, Monastiraki and Gazi. 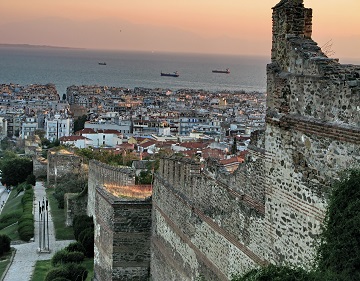 The second biggest city of Greece was founded in 315 B.C. by King Cassander. It is an animated harbour city with an attractive boulevard (Paralia) and a nice park. Thessaloniki is a cosmopolitan city with a rich cultural life and magnificent churches such as the Agia Sofia and the Agios Dimitrios, Greece's biggest church. The most famous attractions of the city are the White Towers. There are also many museums, including the archaeological museum.