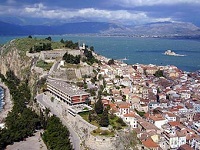 According to us, the Peloponnese is the perfect region to discover with a rental car. You will find the best that Greece has to offer in the field of history, culture and landscapes.
When you drive from Athens to the Peloponnese, the view on the Corinth Canal is already breathtaking.
The island of Pelops is the birth place of Greek mythology from where you can visit many sites such as Olympia, Epidaurus, Mycene and Antical Corinth (to name just a few).
The Byzantine Mystras, the fortified area of Methoni in the South and the Venetian Nafplion are more recent. You can visit many monasteries, churches and castles on the whole peninsula. The landscape is simply impressive and largely mountainous.
Take for example the center of the peninsula, the prefecture of Arcadia: it is a beautiful region with fruitful valleys and many medieval mountain villages such as Dimitsna, where you have a beautiful view on the Lousios gorge.
From Olympia, you need to drive 2 hours to reach Dimitsana. It is also a nice break to visit the typical monasteries built on the hills slopes of the gorge.
Another region that you cannot miss is the remote area of Mani. The central peninsula in the South is mountainous.
The isolated villages such as Vathi and their mysterious tower houses are unique.
One of the biggest grottoes of Europe is located here: Pyrgos Dirou. Other points of interest are the fortified city of Monemvasia (located on a cliff 350m up the sea level) in the South and the charming train journey between Diakofto and Kalavrita through the spectacular Vouraikos gorge.
You also have splendid bays and the azure sea, quiet fishing villages and animated seaside resorts. 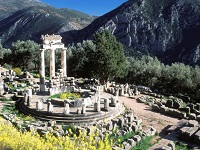 Mountain and valleys alternate in Central and North Greece.
Start with the antical site of Delphi, the most important site of Greece located on the steep slopes of the Parnassos mountain with a breathtaking view on the Gulf of Corinth.
The mountain village of Arachova is not far from Delphi and is worth a visit.
Don't miss the Meteora monasteries in the North. Those monasteries date from the 14th century and were built on impressive high cliffs. The 6 Greek-Orthodox monasteries are still inhabited and can be visited. 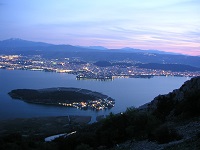 In the North-East, you can find the Olympus mountain chain. The highest point is Mytikas (2917m). The national parc hosts about 1700 species of plants and many animals (such as chamois, bears and deers) and is a paradise for walkers.

The second biggest city of Greece, Thessaloniki is a lively metropolis full of attractions such as the archeological museum and some monuments. In the neighborhoud, you can visit Verginia and the grave of King Philippus II of Macedonia and Veroia with its 50 churches and archeological museum.

The city of Kastoria is located near a beautiful lake and a perfect departure point to discover the Prespa lakes further North (a paradise for ornithologists).

On the West coast, the peninsula of Chalkidiki has nice beaches surrounded by pine forests. In the Eastern part, you can find the holy mountain of Athos and its Greek-Orthodox monks' republic.

The most North-East region is the green Thracie strongly influenced by the Turkish culture. You can see it in the small town of Xanthi, a fascinating melting pot of cultures. In the neighborhoud of Kavala, the Roman site of Philippi, where apostle Paul started his European mission, is worth a visit. If you like birds, we recommend you to visit the delta of Evros.

In the North-West of Greece, there is the spectacular region of Epirus. This mountainous regions with tops up to 2500 meter high is the most isolated region and still has old traditions. The nice fishing village of Parga is located along the coast where it is nice to stay. The heart of the region is located in the Pindos mountains. The capitale of Epirus is the silver town Ioannina where Ottoman influences are obvious. The mountain village of Metsovo is worth a stop.

Don't miss the Zagori, a national park of more than 100 km² composed of 46 villages with grey stone houses and wooden balconies in a unique nature. The Vikos gorge is a dizzy gorge and is about 1000 m deep. Typical bridges with elegant arches overlook the rivers.